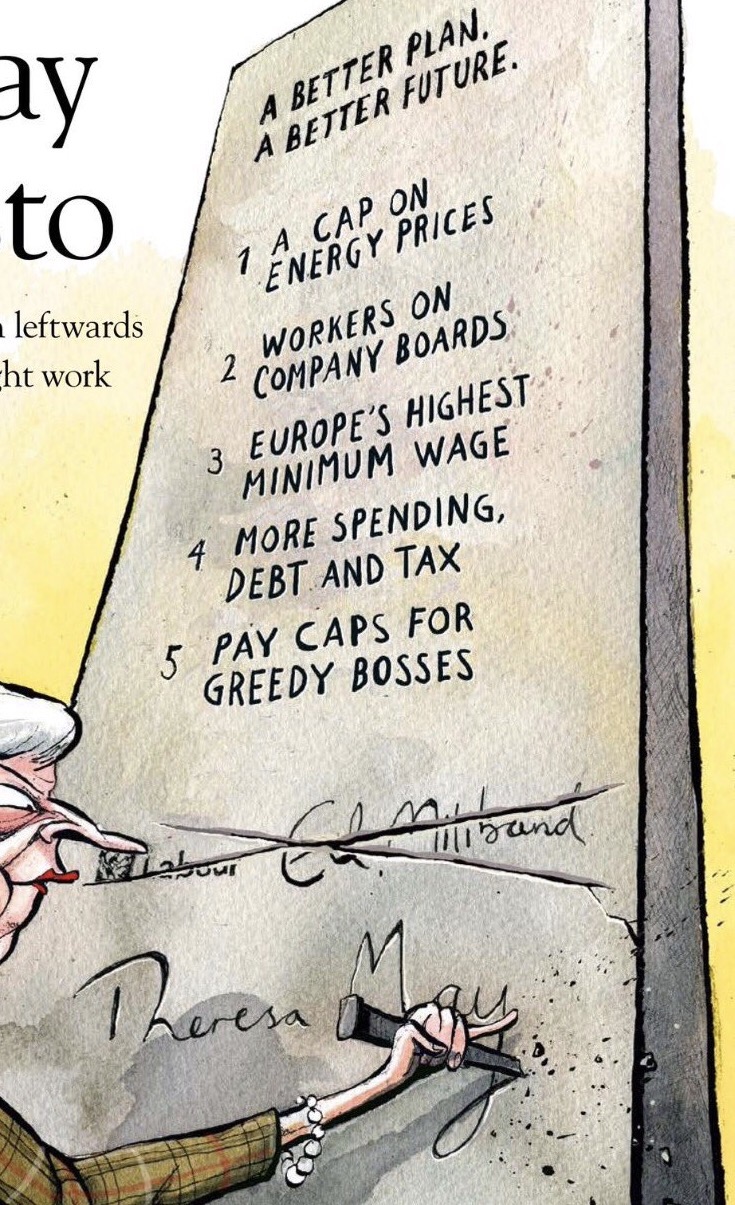 As somebody who has long championed the Brexit cause, I should be in a state of glee. A Conservative prime-minister is seeking a mandate to deliver the only kind of Brexit that is meaningful; one where we leave the single market, the customs union and jurisdiction of the European Court of Justice. Even though the lead in the polls has shrunk to 15% from near on 20% a few weeks ago, it is clear that in this sense May has taken the pulse of the nation correctly. Indeed, it is clear that nearly 70% now just want May to get on with the job.

However, I am anything but gleeful. Frankly, I am in ‘Dis-May’. Brexit does not just represent an opportunity to win a landslide general election, it represents the opportunity to create a Thatcher or Blair style electoral coalition that redefines politics for a generation.

While I think May recognises this, it is clear that her manifesto pitch yesterday was all about ‘parking her tanks’ on the traditional centrist lawn; an area vacated by the movement of Labour to the Hard Left.

However, I would argue that on this May is guilty of a false diagnosis. The political hacks have done the obvious and compared May’s shift to the centre to Ed Miliband’s pitch in 2015; they have done so with good reason, the Fuel Price Cap, workers on company boards and Europe’s highest minimum wage are almost lifted straight from his playbook.

It is clear then, that what May is doing is not revolutionary politics in the vein of Blair or Thatcher at all; instead, she has accepted wholeheartedly the ‘Third Way’ consensus of ‘It’s the Economy Stupid’.

This is where she is wrong. She rightly wants to target the section of the country that feels like it has not benefitted from economic growth, but these are people that have much wider concerns than just the pound in their pocket; in all seriousness, this is the real lesson that May should have taken from Brexit. The country is ripe for a move to more fiscally and socially conservative values. Yes these people value their public services, they care about the NHS and their schools, but they also care about their communities.

David Goodheart’s adroit observation of the country post-Brexit is much closer to reality. People are spilt between ‘anywheres’ and ‘somewheres’; the latter are a large majority, the very people May is intent of bringing into the fold. These people, the people of Sunderland, of Boston in Lincolnshire, the patriotic silent majority; they want more than just economic well-being, they want cultural hegemony too.

Looking across many polls on policy, people in this country want stronger stances on law and order, they want an armed force that supplies our troops well and defends out actual interests; and my feeling is, that people want the state to get out of their lives. People want choices, they want the government to open the way for opportunities, not make the state responsible for the breakfast consumption of the entirety of the country’s youth.

May has the opportunity politicians have once in a generation. Not only can she win the election, she can take the country with her on issues of social conservatism. She could if she was committed, redefine the political centre ground, rather than move into it.

However, she will not.

In honesty, I have found her to be a thoroughly unimpressive individual. She is good at set-piece speeches, but cannot debate with clarity. She appears strong, but believes in very little other than Grammar schools. She is more robotic and wooden than the Ed-Stone, which annoyingly her manifesto embodies.

Not only are these policies not conservative at all, alienating voters like me, but also they are in some instances fundamentally flawed.

Fuel Price cap? Want to know what that means? The maximum price will become the minimum price for many. Those industrious among us who seek a cheaper tariff, often the most impoverished, lose out. Additionally with no ability to regulate an internationally traded commodity, its logical nonsense.

Minimum wage rise. Thanks for the inflation.

I will lend her my vote on Brexit. Just. Rven as a party member, I will now have to do so through gritted teeth. Such a waste.

Begin typing your search above and press return to search. Press Esc to cancel.